In 1890, George F. Johnson, president of Endicott-Johnson Shoe Company and a life-long Methodist, asked the Methodist bishop to send a pastor for the growing shoe-manufacturing community of Lestershire.  Below is a brief timeline of how Sarah Jane got here since then: 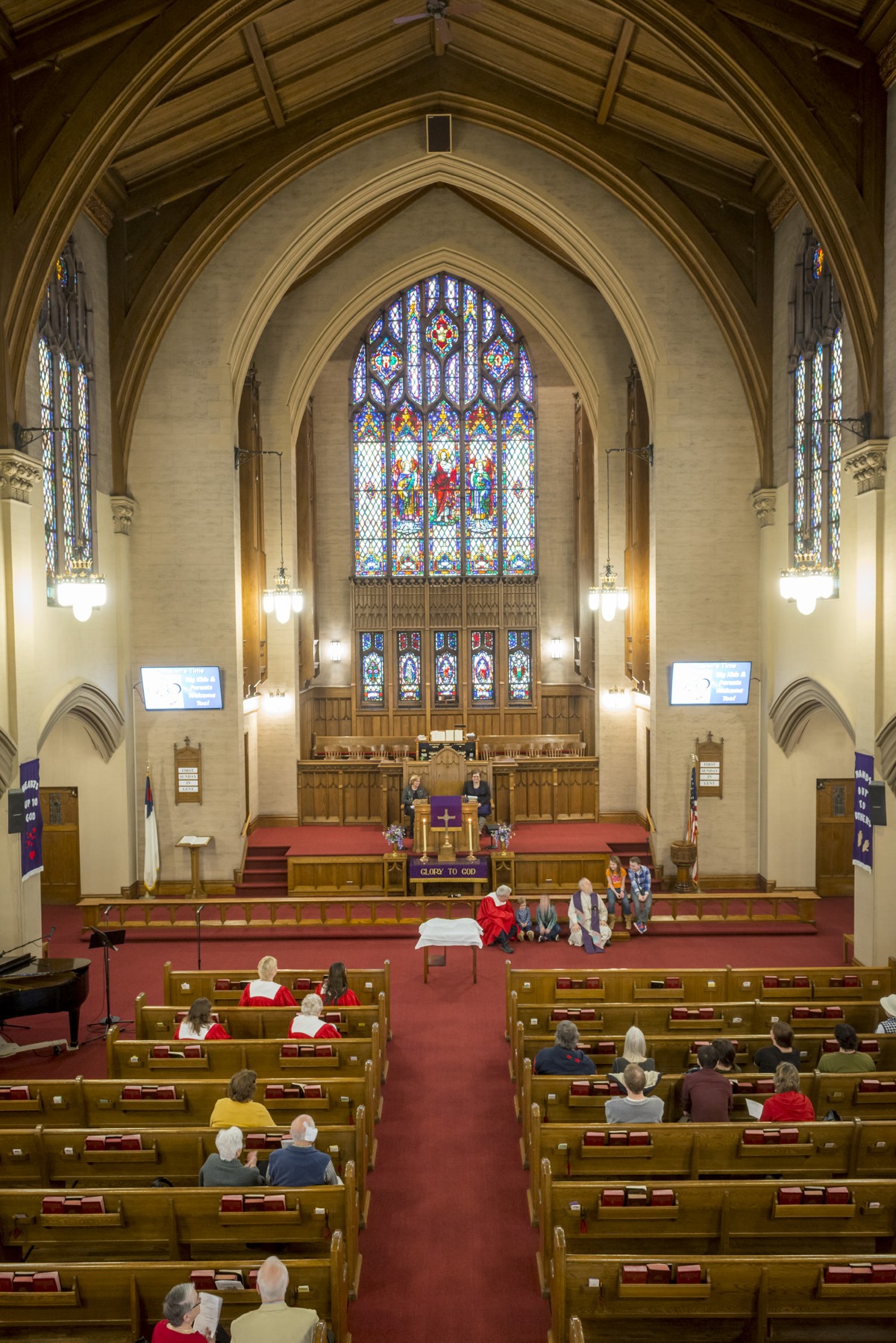 Today, as we reflect on and rejoice in the records of twenty-one pastoral leaders, our horizons are directed to a continuing worship-fellowship center. We are humbly grateful that such a glorious structure is our church home, and that from “this rock” we have been able to provide outreach services in the Christian tradition. At the same time we join in a fellowship of worship and work to the glory of God’s Kingdom.

We, of Sarah Jane Church, extend an invitation to all who would seek to join with us.

“Here is a place where everyone who will, may-Enter to Worship, Tarry to Converse, Depart to Serve.”

The Organ was given in memory of Harry L. Johnson, by his widow, Mrs. Harry L. Johnson and family, Mrs. Arlene Johnson Brett, Mrs. Hermione Johnson Collingwood, Harry L. Johnson Jr., and Miss Ruth Johnson. Mr. Johnson was the youngest son of Mrs. Sarah Jane Johnson. He was president of the Board of Trustees of the Church at the time of his death and was deeply interested in the project of the new building. The heavy duties and strain occasioned by the war were too much for even his strong body. He went home to be with the Lord and the mother whom he loved, in 1921.

Mr. Johnson was a musician of no mean ability and had been organist in the church of his boyhood town, Plymouth, Massachusetts, so a memorial to him in the form of an organ is very appropriate. 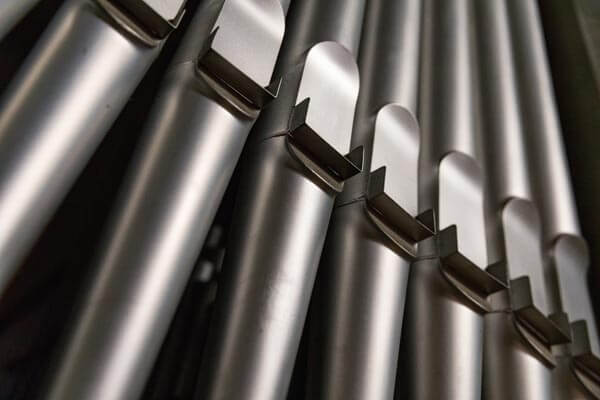 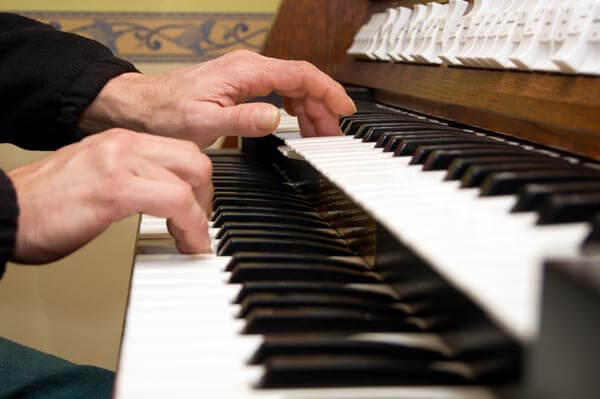 The organ is a thirty-six stop instrument, was built by the Austin Organ Company of Hartford, Connecticut, a firm with a well established reputation. The organ consists of five separate instruments or sections. On the west side of the Choir is the Swell organ, on the east side are the Great and choir organs and in the rear on the west side over the gallery is the Echo organ. The Pedal organ is distributed between the organs on both sides of the Choir loft. The Echo organ is unusual in that it consists of six stops besides a set of chimes of twenty-five tubes. These stops consist of soft string stops, a night horn and a flute giving the effect of distance. In a special chest in this organ section is the Vox Humana which reproduces the human voice.

The Swell organ is one of the most important sections and contains some of the most exquisite pipes, many with very delicate tones. Here are reproduced various string, wind and wood instruments besides the foundation stops.

In the great organ are two great diapason stops which constitute the body tone of the instrument. Besides these are a flute, trumpet and various string stops. This organ is used for solo effects and is used more than any other part of the instrument. The Cathedral chimes are also played from this organ.

The Choir organ is so named because of its effectiveness in choir accompaniment. Its stops give sounds like the waves of the sea and reproduce the soft string and other instruments. This is the organ usually used by the organist on which to play soft music to the accompaniment of communion service and funeral occasions. 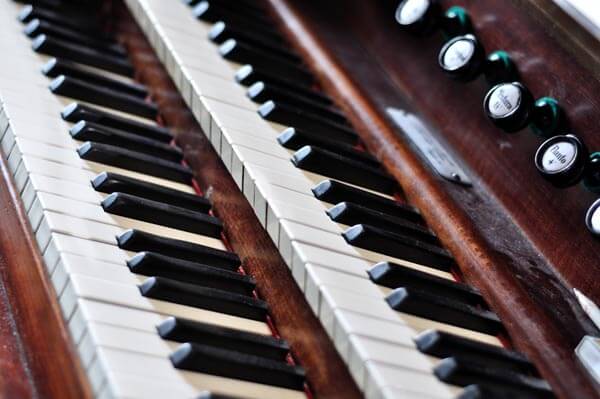 The air is supplied by a seven and a half horse power motor which drives the air into a chest with which each section or organ is furnished. This chest can be brilliantly lighted so that one may witness the opening and closing of the valves leading to the pipes.

The console or key desk contains three rows of keys, electrically controlled, and is moveable. There are about one hundred miles of wire connecting the console to the various organs. The key action is so rapid that it is capable- of producing fifty repetitions a second whereas no organist can produce more than twelve note repetitions in that time.

The organ is a symphony orchestra in itself and at times is like a many voiced choir. It can express all natures; at times it speaks with the tenderness of love, again utters a bold defiance or is heard expressing the hopes, fears, and faith of the heart. It is the most fitting instrument ever devised for sacred worship and is a very fitting memorial to Mr. Harry L. Johnson of so many tender memories.

The Art Glass windows of the Sarah Jane Church were made by the George Hardy Payne Studios of Paterson, NJ., art glass manufactures. Antique glass is used for all of the windows in the building, and was imported from England. It differs from American opalescent glass in that the opalescent glass has the colors streaked through it, but in the antique the colors are thoroughly mixed.

Some of the glass is what is known as rolled art, much of it is blown. Air is forced into the glass by pressure, causing bubbles of pinhead and larger sizes to appear through the glass like the air bubbles in water. The light reflected from these uneven surfaces causes it to sparkle. 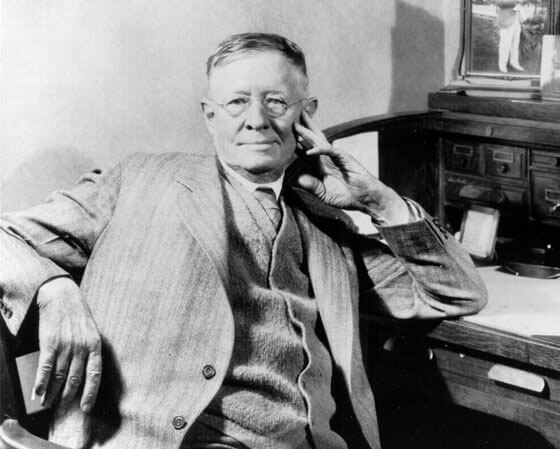 As loud voices clamored about the ills of his time, George F. Johnson quietly began a revolution. Possessing values that he attributed to his mother, Sarah Jane Johnson, George’s love for people, natural tenacity, and unusual courage caused him to triumphantly depart from the popular philosophy of his day to forge a path into unknown territory. This Spirit is what attracted many to the Southern Tier of New York State and what resulted was, “the Valley of Opportunity.” George F’s leadership propelled the eight hour, five-day work-week, fair wage and benefits to becoming a reality in the United States of America. His vision shaped his sphere of influence; and then something funny happened– it became a reality across America.

George F Johnson helped change a nation and the Dream Center believes that each individual has been given the potential to do the same, alongside others. The great and rare privilege it is to live in a free society is what gives us the opportunity.

We see freedom as the opportunity to see how much good one person can do. Programs encourage us to look at the values behind George F. Johnson’s life, his faith, his love for the ideals of our founding fathers, hard work, perseverance, and patience. This life is an inspirational model of how to build a life that leaves a legacy for future generations.

On the exterior walls of the building, high up near the roof, are to be seen various symbolic designs. On the west side, beginning at Main Street, they are as follows: Four fishes caught in a net, signifying God’s care over those who trust Him; the Anchor which is our faith in His Word; the Bible, and finally the Peacock, which is the symbol of immortality. On the east side, beginning at Main Street, they are as follows: Two fish, for as the draught of fishes on the west side shows his miraculous power able to supply all our needs, these show his daily provision; the Crown; the Ark which from the days of the Roman Catacombs has pictured the Church as able to ride through all periods of persecution, and the Lamp which is the light of His Word. In the panels between the two portions of the front window on Main Street are found cut in the stone: the Star of Bethlehem, the Carpenter’s tools (for Christ was a carpenter), the Lilly and the Palm (symbols of purity and triumph), the Crown of Thorns, and the Cross. 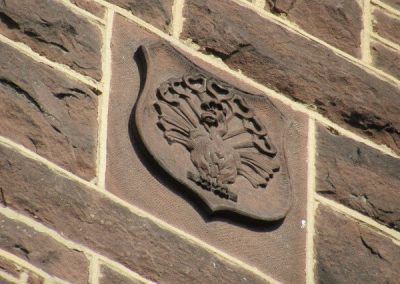 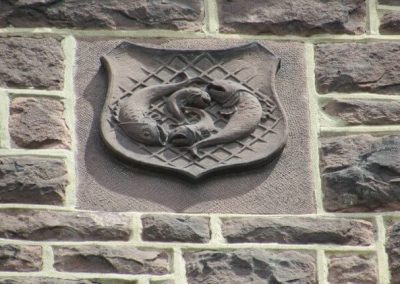 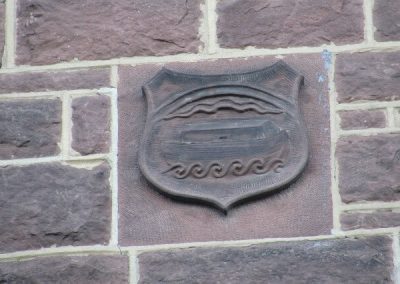 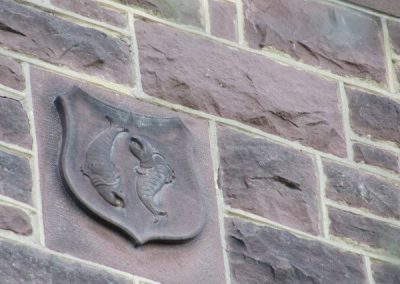 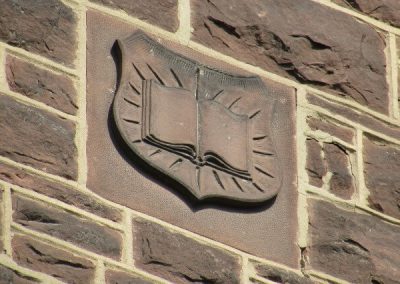 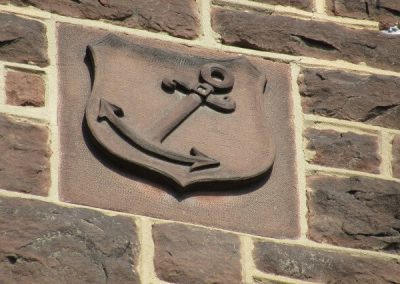 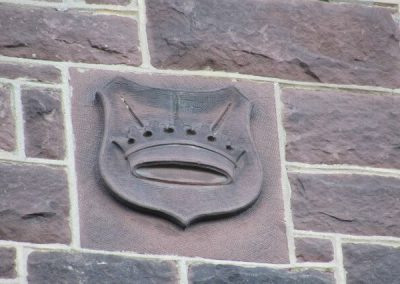 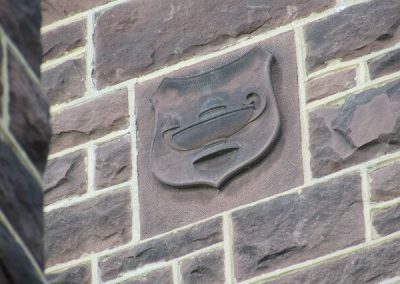 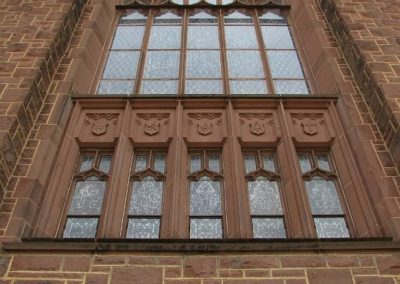 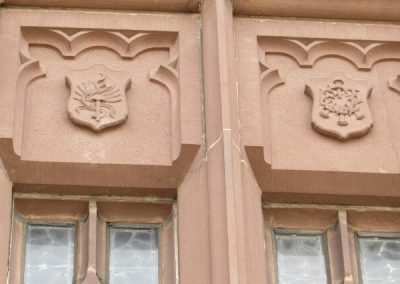 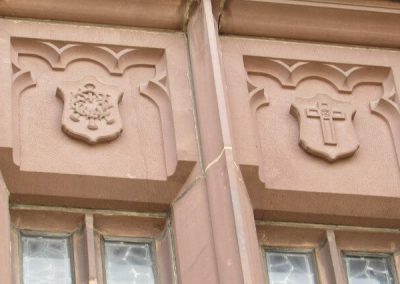 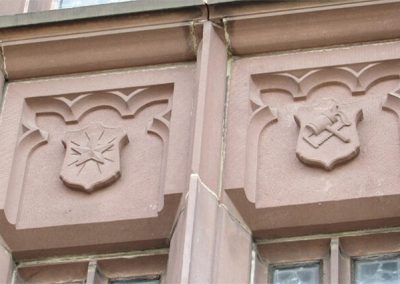